Betty because I was getting Betty Draper vibes after I finished this dress. Probably a more risque Betty, but Betty nonetheless. So I dragged on some red lippy and brought out the big black shades to channel her even further.

Isn’t it weird how one teeny tiny detail can mean the difference between strutting out of the house in your latest dress with all the confidence in the world or rocking in the corner of your bedroom with uncertainty?

This is one of those dresses! It’s only a keyhole right? But I still can’t decide. So strange for me. I generally make decisions in a heartbeat. Uncertainty isn’t my thing at all.

Let’s talk about B6413 anyway. I wrote it off when I first saw it because I assumed the top would be a nightmare to fit and the construction would be too much for my brain. Then I saw it pop up on a few clever women on Instagram and I was a bit more tempted. As it turns out, I couldn’t resist grabbing it when Butterick were having their $2.50 sale recently and I really wanted this one. Buying two makes the horrendous postage from the US worthwhile, right? Of course it does! I don’t know if these ones are even available on our shores yet, it seems to take forever for them to get over here. 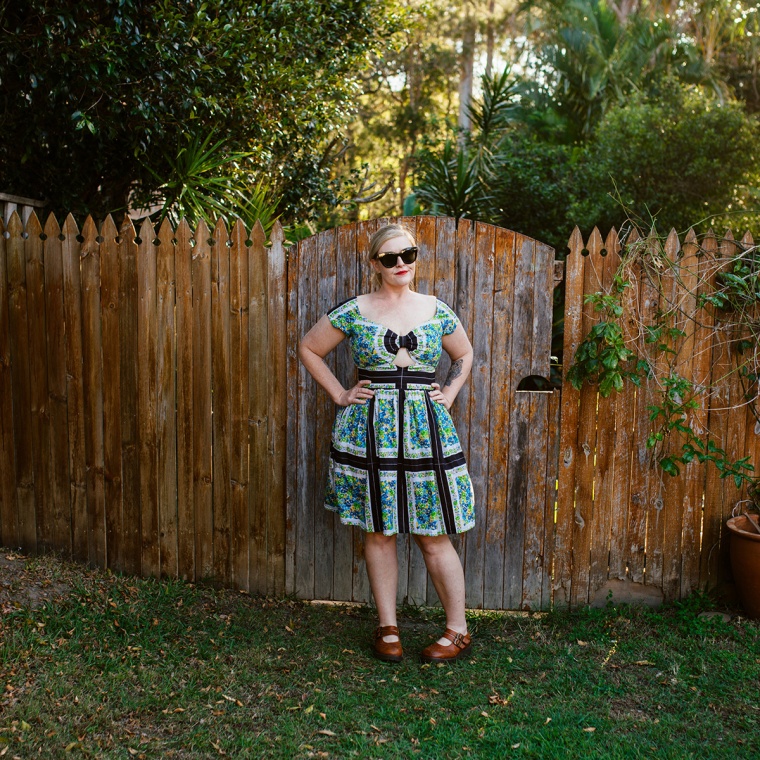 So it turns out I was wrong. It’s fine, I can say it. The fit wasn’t a big deal and neither was the construction. And can I say what a relief it is to have a pattern envelope without eleventy billion different pieces and combinations inside? Very nice. Just the one dress without any variations. Of course I had to go ahead and do a gathered skirt because straight skirts aren’t my jam – which meant I only had to trace the bodice pieces, easy!

But this is another no bra dress. Do those sticky fillet thingies from the early 2000s still exist? Maybe they would work? Not sure. A regular bra definitely does not though.

When I first made it, the booby part (oh yes, I know all the technical sewing terms) was sitting too low. One false move and those wiiiide shoulders were heading south and the whole bodice was going to end up in a puddle around my waist. It all felt very precarious. After mucking about a bit, I decided the best fix was going to be taking a wedge out where the bodice meets the sleeve. Even though that meant unpicking all my hard work. WOE. I did it though. I took 2.5cm out of each one and it’s much better now. More secure. Less likely to end in a wardrobe malfunction. Actually, when I had it all opened back up I was considering working some bra cups into it, but I couldn’t figure out how to secure them without it being seen from the outside. I’m not sure how much of a difference it would have made anyway. 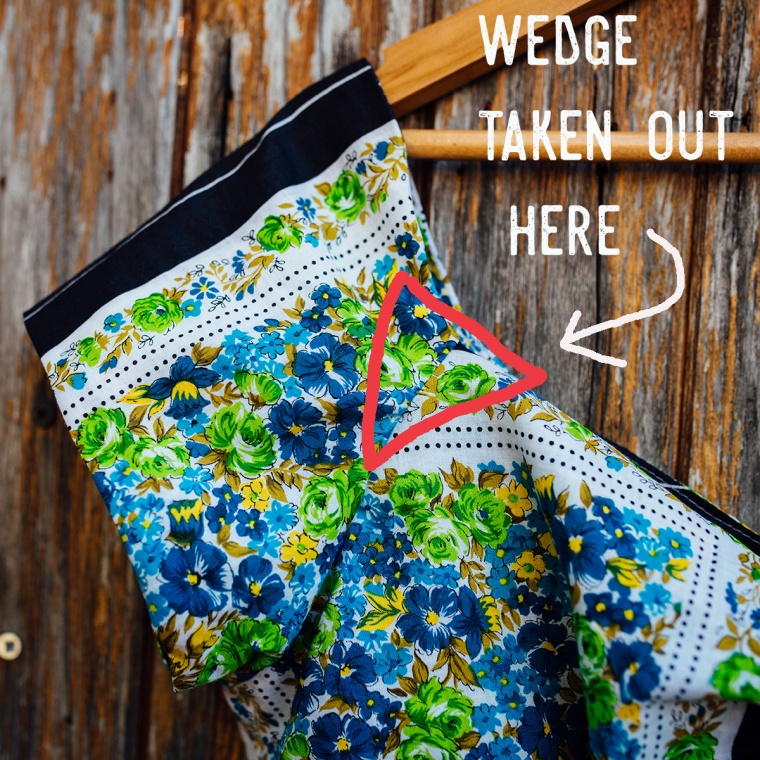 I haven’t told you about my fabric! I bought it from an op shop but wasn’t sure what it was. It’s very soft, like a lawn or voile. I assumed the squares were for quilting, but the good ladies of Instagram told me that they are handkerchief panels! How clever! Considering I have no use for 4 metres of hankies though, I decided it wouldn’t be a bad choice for this dress. If I hated it or it didn’t fit, no great loss. I still have over a metre of it left. I got a bit creative with my cutting. The fashion police might call the black band around my waist UNFLATTERING, but I think it’s interesting. See that bow tie look? INTENTIONAL. Proud of that effort actually. 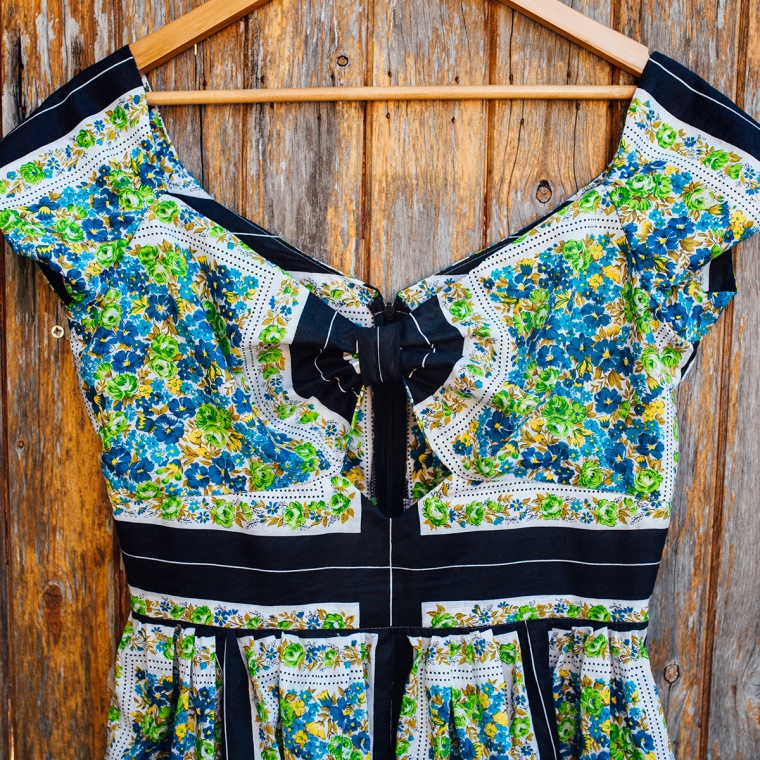 I used the same fabric for the lining, which is mildly confusing but I had so much of the fabric that it seemed sensible. I marked the lining so I knew which was which when I was sewing. I added side seam pockets and laughed in the face of slip stitching. Forgive me. This is it inside out, which barely looks any different to right side out. 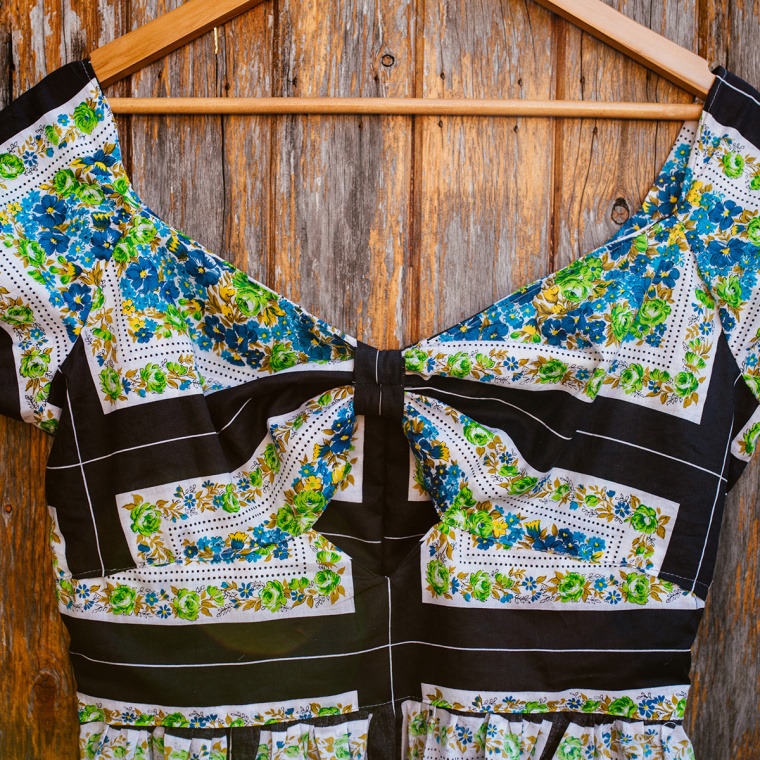 Size wise, I’m 41/32/41, which puts me in a Butterick 18 but previous experience tells me that I have to drop to at least a 16 (where finished measurements put me). My last Gertie Butterick was still too big at a 16 though, so I dropped to a 14 on this one. This isn’t the style of top that you want extra space in. It’s borderline at the waist (could be bigger) but there is still a bit of room in the booby part. I’m a D/DD too, so if you’re smaller in the bust you might find it a bit big in that part.

Ooh and if you’re wondering (I totally was) if there’s visible boob from side on, there is. Ha. Not a lot though and honestly, if someone is going looking for that, then they deserve to cop an eyeful. 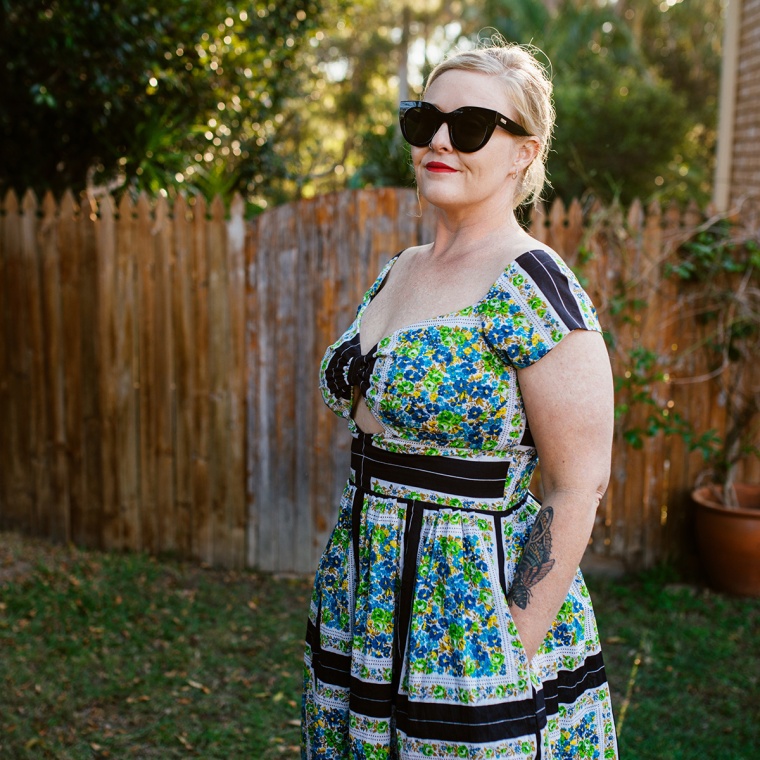 Hooley dooley I can talk a lot. Sorry. I think I’m done now. And actually,  I’m done with the indecision too. I’m ok with this dress after talking about it so much. Bra be damned, I’ve talked myself around.