This weekend was spent finishing off a pile of UFOs I had languishing in a basket, mocking me for too long. Most of it was really boring and involved unpicking and sewing on buttons, but this Rosa was pick of the litter. 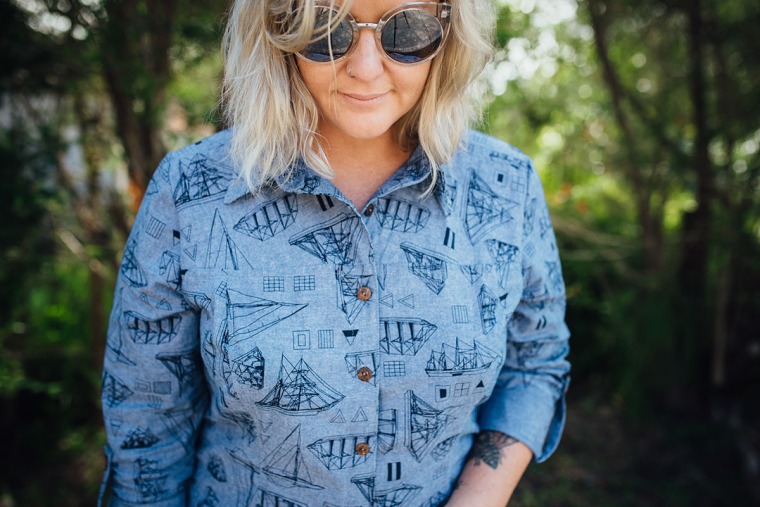 I wasn’t sure why I had ignored it for so long. I cut it out just after making my last one and I adore the fabric, so it’s not that I was feeling particularly uninspired. Then when I was getting towards the end, it hit me. Buttons. Twelve of them. It always feels like a huge task, but when I get into the swing of it, it’s fine. And yeah, my machine has a one step buttonhole function. If I had to do those suckers manually it would be a different story. There’s also a lot of top stitching, which I have done in grey thread because my top stitching isn’t something that I want to draw attention to.

I would also like to point out that I’ve made everything I’m wearing except my shoes and tights. And I hear you say ‘Yeah? So you made a dress? That’s nothing new, Katie.’ That’s true, but think about what you can’t see. Yep, bra and knickers are made by me also. And since I’m bragging, would you take a look at the projection and shape of that right boob? God I love this bra. It’s Kwik Sew 3594. I have four of them now. A lot of women prefer a rounded shape to the well, boob shape. But I personally do like a boob-shaped boob. Yeah, we went there. I just wanted to highlight it because a lot of people seem to think handmade bras are unsupported-wrestling-puppies-in-a-sack kind of situations, but I assure you they aren’t.

Onward. You want to know where everything is from:

Buttons: thrifted. Got a bag of about 200 wooden buttons for $2. Do recommend.

Shoes: Vintage Dr Martens scored on ebay. Not sewn obviously, but lots of people ask me about them.

Ignore the orange ear. Apparently he’s been wandering through the garden, helping the bees pollinate. Still tilted to the left, as you can see. Bloody dog and his bloody ears.

I haven’t shared much about the construction of this Rosa as I covered it in my last one. I didn’t make any changes except the placement of the sleeve tabs – I just rolled them to where I wanted and put them in the right spot. Easy. Now excuse me as I swan off to the yacht club in my nautical dress.

Kidding. I’m going to reheat leftover Thai and do some work.